After a tame Friday night (remember – no drinking this month), I woke up early feeling refreshed. After a little work and an episode of How I Met Your Mother (hilarious), I biked into Cambridge for brunch at a colleague’s restaurant. Today was their first day open and I was their 1st customer. Tasty food, nice atmosphere, and friendly staff. But my visit wasn’t just for the free Mexican tapas… the restaurant is close to a bike path that would lead me out of the city and close to some woodsy areas. Back on the bike!

Heading out of the city on the bike path, I had one mission: FIND A NEW HOME. I need to find a spot where I can sleep at night. Preferably away from people and any well-trafficked areas.

At first pickings were pretty slim. Every bit of foliage that might offer some respite from the public was accompanied by beer cans and plastic bags… indicating the likely presence of homeless.

About 5 miles outside of Cambridge I found myself noticing more and more foliage. Quickly the bike path surroundings transitioned from small bushes and shrubbery to big bushes and forest. A couple miles further and I discovered a path leading me into the forest. Win!

Following this path inwards and delighting at the noticeable lack of beer cans, I found a divergent path that led to a small clearing. My new home? I was immediately attacked my swarms of mosquitos (note to self: buy bug repellent) but the location couldn’t have been better. Secluded, quiet, and with some flat-ish space to lay upon. I made note of the location and returned to Boston.

That was all fine and dandy, however, the real challenge for the day hadn’t begun…

I had two social outings after my excursion into the woods:

Both involved plenty of alcohol, and both were with complete strangers. Challenge… ACCEPTED!

A few weeks back I’d danced salsa with the “Miss”… 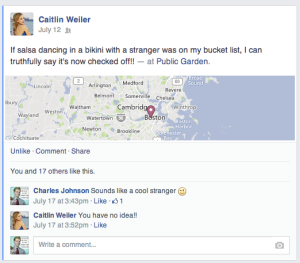 …and she invited me to her fundraiser. Which centered around a drinking game. Soda water and lime for me =)

I leave the Miss and her crew behind and head to the White party, which I assume is titled as such for the group that I hear is behind it, Charles White, the apartment complex in Back Bay.

I arrive to find a celebration of white, as in, the absence of color. My dark blue jeans and blue striped shirt stand out enough to get the host’s attention: “You’re wearing color?! OK you have to get punished. Drink this shot.”

Less than 5 minutes into the party and I’m put on the spot with a drink.

So did I give in and conform for social norms’ sake? Hell no! I took the shot and handed it off to someone else. Now where can I get me some soda water and lime?

The rest of the evening was spent doing the typical “meet & greet” routine while dodging jello shots. I’ll admit it wasn’t the easiest to deal with considering I had my future homelessness on the brain, but it was something worth getting used to.

I’m off to bed. I need to enjoy it while I have it!